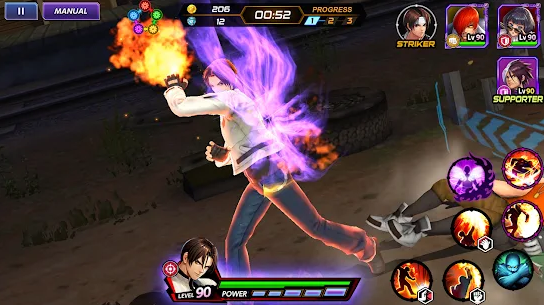 When it comes to games on android, the fighting and action games take the lead. However, some challenges come with it, like the cumbersome controls. Developers have worked on simplifying it, losing some essential characteristics of the game, making it not common to find an enjoyable fighting game on android. In this article, We have completed the task of reviewing the best fighting games for android in 2022.

The King of Fighters ALLSTAR

If you love fighting games, here’s one you should check out. This fighting saga was released in the 90s and was losing its touch until it returned in android under the name SNK fighters. It has better motion control than other games and can also be played on gamepads though it was initially for touch screens. The game has a campaign, a cooperative mode, and a rooster general that has more than 200 characters and extra exciting features.
Download on Google Play

The name already suggests a thrilling game, and it seems to take after Capcom’s “mythical” final fight, but most of the characters are inspired by other fighting franchises. This means that you can find a fighter similar to Jack-2 from Tekken, or a reminiscent of Sakura from street fighter.

This inspiration from other games is another thing that makes final fighter interesting, but even the combat itself is fun. You will also get to experience everything about a fighting game; the low, medium, and high jabs which are rarely available in mobile games. In the Final fighter, you can choose between three game modes; arcade, 1v1, and 3v3. Do not hesitate to check this one out.
Download on Google Play

This game is an improvement from shadow fight 2. However, the bar was already set high from the previous installation. A shadow or silhouette was part of the controls, now there are scenes and characters rendered in 3D, all with quality attention to detail and beautiful cinematography. The game controls work very well though there is no multiplayer mode. The game is interesting enough that there might be no need for a partner.
Download on Google Play

Mortal Kombat is the reduced version of the Mortal Kombat for video games. It has frequent updates that give a new feeling every time. The graphics are a sight for sore eyes with great animations. The fights are mostly 3 on 3, with the touch controls working perfectly. If you are a fan of the Mortal Kombat saga, then you should try this one.
Download on Google Play

Skullgirls is a 2-D fighting game with RPG elements. It has aesthetic and character designs based on anime collections with fast and energetic gameplay. Skullgirls is great for those that love fast and direct actions games. The game also allows finessing characters with new skills and moves. The daily missions to be completed will leave you glued to your phone screens.
Download on Google Play

Just like Mortal Kombat, Injustice 2 was developed by Warner Bros and is a popular saga among android users. It has good graphics and effective controls that add to the thrilling feel of the game. If you are an avid lover of DC games, then you will find most of your favorite characters here. Injustice 2 has a campaign mode, it offers long hours of play and an online multiplayer mode.
Download on Google Play